Edward Killalea was born in County Galway Ireland in c.1816. When he was 19 years old he was involved in a brawl in which two men were killed. On 17 March 1836, he was charged with manslaughter at Galway, and sentenced to transportation to Australia for the term of his natural life.

In 1847, Edward married, and he and his wife Maria worked on a clearing lease in the area we know as Killalea State Park, or The Farm, today. The family, which eventually included 12 children, lived in a slab hut down near the beach.

Edward became an important pioneer of Shellharbour and an enterprising settler. He was an Alderman on Shellharbour Municipal Council from 1870-1872, and on the committee to form the Shellharbour Steam Navigation Company.

In 1868, he became involved in a gold prospecting venture at Killalea Beach with Thomas Henry, after discovering alluvial gold in the beach sand. The enterprise eventually failed and Henry left for the goldfields at Nerriga NSW. In 1872, Thomas A Reddall and Killalea reopened the mining operations, however Edward Killalea died later that year and mining ceased.

Edward died at the Commercial Hotel in Wollongong in 1872 after enduring several seizures. An article in the Kiama Independent stated:

‘The late Mr. Killalea, an old resident of Shellharbour, an Alderman of the borough, the father of a large family of seven sons and five daughters, very generally, indeed we may say universally, respected for the kindliness of his disposition and integrity of character’

The Coroner and Jury found ‘that the deceased, Edward Killalea, came to his death by strychnine, taken by him whilst laboring under the effects of excessive drinking’. A bottle marked poison was found in his pocket.

Killalea was farmed by brothers, James and Daniel Buckley in the early 1900’s. James farmed the northern end of the park and lived at Seaview farm, where the Fraser family later lived. James built a pit-sawn house in the early 1900’s for his family, and in 1912 Seaview farmhouse was extended. Daniel Buckley farmed the southern end of Killalea State Park, near where the camping ground is today.

The Fraser family moved to James Buckley’s original property in the 1920’s and farmed Seaview until the 1960’s.

In the 1930’s, Edward and Maria’s son Patrick (then in his 70’s) was visiting the area and went for a walk along the beach that was once his boyhood home. On the beach, he met 15-year-old John McNevin Fraser whose family farmed the land. The Frasers lived at Seaview farm near the current kiosk at Killalea State Park. John took Patrick up to meet his parents and after this, the Fraser family renamed their farm Killalea in honour of the Killalea family who had farmed the land before them.

Years later, James Killalea, grandson of Edward and Maria, recalled that when his grandmother lived with them in her later years she told stories of ‘the little people’ who would come down the chimney. James and his brothers and sisters were then too scared to go to sleep. He remembered her talking about their old farmhouse near the beach and making butter and bread which the family sold along with milk.

In 1997 descendants of Edward Killalea placed a plaque on the site of the family’s slab home in his memory. 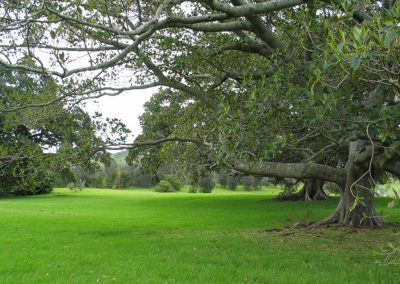